Love was in the air since Valentine's week was being celebrated all across the globe. So, was I in the same mode. Afterall it is the most celebrated week to express love and affection. Indian Coffee House at Connaught Place was an offbeat location chosen but now as I recall, I was destined to witness a life-changing event of my life which shook my innermost-self.


It was our luck that after ten minutes of waiting, we got the table next to the window with a pleasant evening view. I had not thought at that time that I would not look outside even for a split second during that visit. However, after getting settled, waiter offered us a glass of water and we ordered ICH's Special Coffee & Butter toast.

Just then I glanced across the hall at an old man who managed to get a lone seat and kept his violin case instead of settling down himself. A minute later, he had already taken it out and was cleaning its surface & bow. By that time, our food was served and I was engrossed into the aroma of Coffee.

Melody emerging across the hall caught my attention and I was mesmerized by it, carried away to a different world, connected with the music produced by tender touch of bow on strings even without any basic knowledge of the notes. Joyfully saturated with the music, I had completely lost track of my whereabouts, friend, food and time when my cellphone buzz brought me back to the moment. Realization has dawned upon me that for the very first time I was in a musical spell.


"Music gives a soul to the universe, wings to the mind, flight to the imagination and life to everything.” - Plato

Over and above the music, I was getting inspired by the Man playing it. I had entered into the "Realization" mode. I had realized the paradox that I will share later in the story. But before that, my mind was flooded with plethora of questions and their probable answers I could think of, one of which was:

Why was he performing during autumn of his life?

The paradox that I had realized were the withered features underlying the enthusiastic face. I felt a connection with a complete stranger. Even without interacting I was determined to help him in any way possible or viable for me. There was a flame ignited deep inside me urging me to bring about even a minuscule change and bring a smile to his face. Yet, I was hesitant to stand out and approach him due to dilemma I faced:


"I do not have much currency bills in my wallet or even in bank account (Probable downside of serving in a Government Job in India) to do a charity to his cause and giving him any small amount means I am demeaning his art & effort. Further, he seems to hold his character to struggle against adversity rather than expecting a generous charity."


After carefully placing Violin next to its case on the table, he took out a couple of small packets and proceeded to the tables placed farthest from mine. Humbly accepting the praises from patrons, he showed the packet. From that far I could not hear him but was sure that he was offering it to them, moving from table to table. Though unhappy for no one was accepting his offerings, he wasn't pitching so hard for it. He must be proud of the content of that packet. Intrigued by the content of packet, inspired by his aura and even more was my determination to help him that was driving me to stand up from my seat. Contrary to my nature, I was nervous when I realized he had almost reached our table. The packet he had to offer was a Compact Disc.

He- "Hello Friends, did you enjoy the music?"

Me- "Hello Sir. Yes, we did enjoy it. It was wonderful and melodious."

He- "Do you want to buy this CD with collection of 24 tracks that I have recorded?"

Me- "Yeah sure Sir. Definitely." 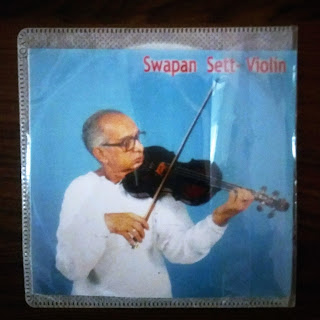 Then he moved to next table. He was brimming with passion and he was confident of his art and himself. Next, my google search of "Swapan Sett" returned me several links about him. That day, my eternal and unbreakable bond with caffeine was left broken as my coffee went cold unattended. Reading through several links (timesofindia, milaap.org, youtube, ndtv), my eyes welled up with tears and my heart with compassion & struggle. No one would have ever fathomed his struggle just by knowing him superficially. The enthusiasm on his face was deceptive, hiding all the pain his family has been through.

After sharing with my friend all the details that I read about him and his determination to help his wife fight against cancer, I wanted to have another conversation with him.

Me- "Hello Sir. It was nice meeting you."

Me- "I just read some stories covering you on internet."

He- "Life moves on. Everything is part of life."

(There was a momentary silence.)

He- "She is doing good. Enjoy your time." 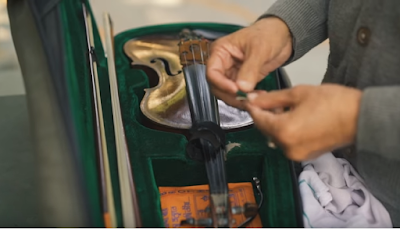 I retreated back to my seat He then walked slowly to his seat across the hall and ordered a coffee. He packed the violin into its case. After sipping in coffee and paying his bill, he picked up the case and walked out of the restaurant. That half an hour gave me an altogether different perspective about life, passion, struggle, affection, optimism. I was wondering how my observation brought about such a phenomenal shift in my own belief system. We presume old age or post retirement age as the time to relax and chill out, but situation or self-determination can make a person do wonders even at that age.


Life is so ironic. It takes sadness to know happiness, noise to appreciate silence, and absence to value presence.

My perspective of living life and handling bliss and sorrows had completely evolved since that day. There are plethora to changes that an individual can make in own life to make it happier. The incident is still fresh in my memory as I recollect memories of that day and will continue to be as it was rare when a complete stranger motivated me in such a short time-span. It was predestined. The only regret that I carry with me is that I forgot to click a photograph with him as a souvenir!!!!